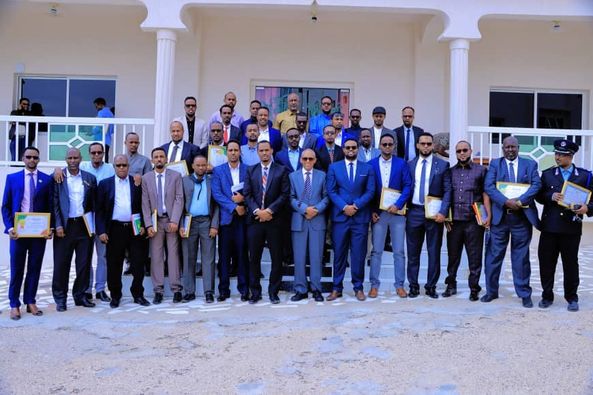 HargeisaJuly 27,2021(MOF) The minister of finance development of the republic of Somaliland honorable Dr. Sa,ad Ali Shire accompanied by the Deputy Minister, Director General and as well as other Senior Officers of the ministry has today concluded the usual semi-annual performance for the revenue collection departments of the ministry of finance development—customs and inland revenue departments among other sectors that contribute to revenue generation task of which purpose was the evaluation of their respective activities during the first six months of the year.

This workshop in which administrates from revenue departments in the regions and districts of the country were convened, each administrant has been heard of a testimony regarding his functional activities against the preplanned set targets in the first six months of 2021.

Fortunately, the outcome from the evaluation indicate that, the actual revenue collected by the MoFD in the first quarter of this year is around one percent (1%) higher than the estimate one. and it’s a sign of the good performance of the revenue departments.

In conclusion, an honorary certificates and other casual awards have been awarded to those officers and participants who, according to public relations department of the ministry finance development, met the budgeted revenue target required from the participants in the said time frame. The high profile members of the ministry appreciated revenue administrates and officers for the tireless efforts they are usually accustomed to play.

As matter of practical fact, it is worth noting that for the past financial years, there has never been even a one-digit revenue figure went short of the budgeted (deficit), with the prevailing economic  circumstances that we share globally in mind.

However, the ministry of finance development of the republic of Somaliland which is the executive organ responsible for managing revenue and expenditure of the state, with the help of the tax paying citizens, managed to escape and keep the task back on track.

Moreover, there was neither external fund indebted by the nation nor carried out printing currency since 2016 thus enhancing the national tender value (Somaliland currency) what so ever locally or abroad but the sole source of fund with which to manage current and capital matters is the mere revenue collected from our accountable citizens who pay the eligible tax levied on their properties and services.

Before the closure, the honorable members of the ministry and revenue officers have come to terms on agreeing the second budgeted revenue target which must be met in the eyes of the national budget which comes currently into effect.

Apart from revenue collection, the officers were commanded to fully accommodate and apply the public financial management reform program from which the following factors deduce: